Details
This walk is longer than it appears on the  Peninsula Crest Trail Map (JPG), but the hike’s halfway point stroll on the ridge of the trail, with its numerous oaks and unique views of the reservoir, makes it worthwhile. Also, there are 2 picnic areas with benches and tables on the Peninsula Crest Trail.

Peninsula Crest Trail
The Peninsula Crest Trail was created when the reservoir was expanded in 2012, and is the newest trail at Los Vaqueros. Though we saw few animals (a large group of turkeys were our highlight), many others have seen bald eagles, golden eagles, coyotes and bobcats on the peninsula. 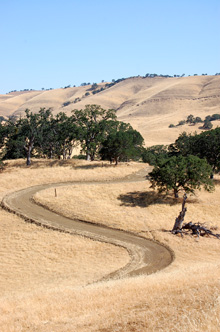 Most of the trail is gravel road, the welcome exception is on portions of the Peninsula Crest Trail where it is recently-graded dirt.

With electric boats on the reservoir, and no nearby roads, this is an extremely quiet and peaceful walk. The day we went, there was no noise other than what nature provided, and little wind. Crunching on the gravel trail as you walk is noisy, but if you stop frequently you will hear a lot of bird and animal calls.

Shortcuts
If you want to take a shortcut, avoid going around the Peninsula Trail. Stay on the Los Vaqueros Trail and then go up the steep Peninsula Crest Trail with its switchbacks. You can avoid about two miles, and still get the great views.We made this trip in late spring, and left the Marina about 6:30 a.m.

Avoiding Hills
If you want to avoid some hills on the way back, take the fishing trail. When you pass the large log bench and big tank about a mile from the Marina, cut down onto the fishing trail. You'll avoid a few rolling hills.

With frequent stops for taking pictures and listening to birds, the walk took us about four hours to complete. We expected to see snakes, but didn’t. Snakes do like the warmth of the gravel trail, so watch out. Also bring your own water and other snacks.
Los Vaqueros FAQs