The quest for reliable, high-quality water is the reason the Contra Costa Water District (CCWD) was formed in 1936 (PDF.)

Even now, that drive shapes nearly every aspect of the District's remarkable history.

As heavy industry and agriculture were being established in the early 1900s, factories and farms sprang up along the Delta to take advantage of the fresh water supply.

But trouble was brewing.

Cycles of extreme salinity in the Delta were reported in the late summer and early fall months, when fresh water flows from the Sierra dried up and salt water from the San Francisco Bay flowed into the Delta. 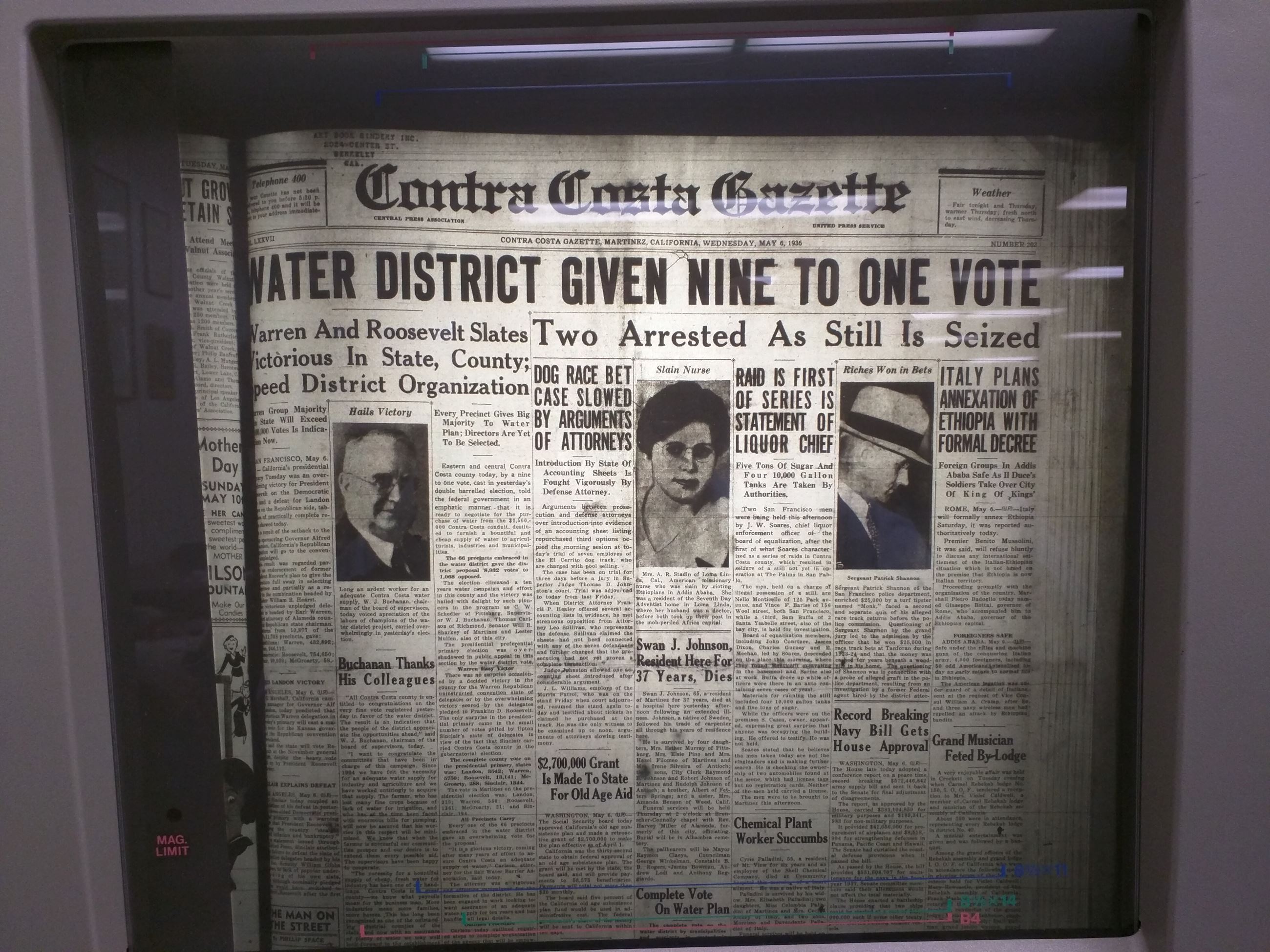 Occasionally, water from the San Joaquin River near Antioch became too brackish to use.

In the early 1920s (as a 13-year drought gripped the area), industry began to suffer from the Delta's increasing salinity. To keep the factories operating, fresh water was hauled into the area in tank cars. The drought ended in 1930.

Local farmers had to stop irrigating and land values declined.

Unwilling to sit by and see their farms and businesses ruined, a group of citizens formed the Bay Barrier Association to address salinity issues.

The group originally considered building a physical barrier to prevent salt water from reaching the central Delta. This grandiose idea proved impractical with President Herbert Hoover putting an end to all speculation.

With the political machinery in place to pursue a solution to the area's water woes, Richmond attorney Thomas Carlson was retained to explain the salty situation to the California Legislature. The lawmakers listened, and in 1931 adopted a State Water Plan that proposed a "Contra Costa Conduit," known today as the Contra Costa Canal.

In 1933, Governor James Rolph signed into state law the California Central Valley Project Act authorizing construction of structures and waterways including the Contra Costa Canal. But the celebration was short-lived because the Great Depression made it impossible for the state to sell project bonds.

Attorney Carlson and his delegation did not give up easily, and struck out for Washington, D.C. to engage the federal government.

Three years of tireless effort finally bore fruit in August, 1937, when the Central Valley Project became a federal commitment to be carried out by the U.S. Bureau of Reclamation. 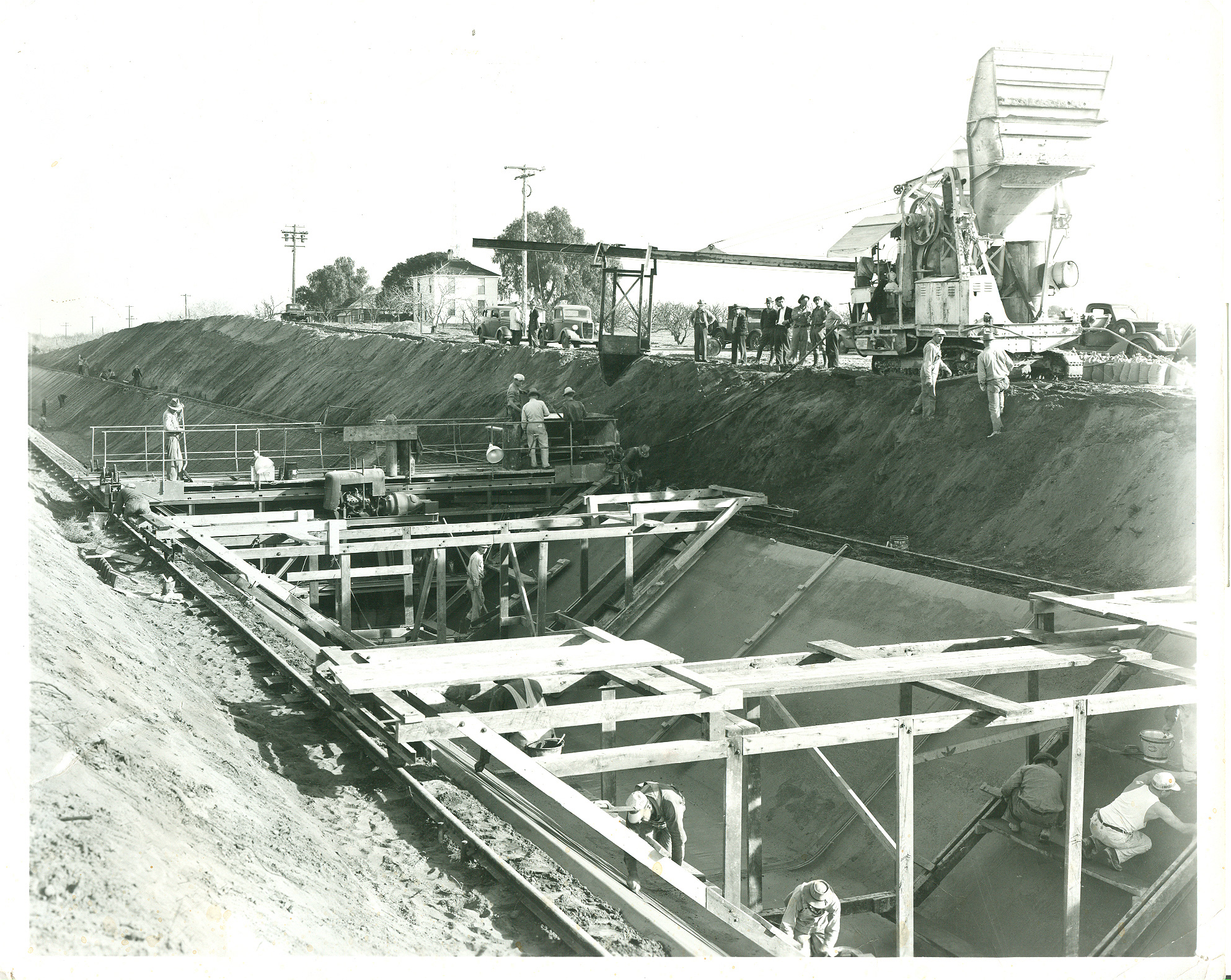 On November 7, 1937, ground-breaking ceremonies for the Contra Costa Canal were held in Oakley.

Over the next 11 years, the 48-mile-long canal was dug from the Delta intake at Rock Slough near Knightsen to the city of Martinez.

The first water was delivered to the City of Pittsburg in 1940, and the occasion was marked with a three-day celebration called the Water Fiesta that include the largest parade ever seen in Contra Costa County, the coronation of a Fiesta queen and more.

The demands from World War II caused construction delays due to shortages of labor and materials, but the entire canal was completed in 1948.

As the canal was being considered and planned, the Bay Barrier Association drew up plans for the formation of the Contra Costa County Water District, a legal entity to contract, purchase, and distribute water provided by the Bureau of Reclamation.

The District's formation was overwhelmingly approved by voters (8932-1068) on May 5, 1936, and just four days later the Contra Costa County Water District was incorporated as a special district on May 9, 1936. One of the organizers of the District was former dairyman Ralph D. Bollman, who was elected to the original Board of Directors and would serve the next 32 years as the District's president.

The first couple of decades passed uneventfully, as the District went about its job of purchasing and distributing untreated canal water to cities, farms and industry - its sole responsibility.

The cities and other utilities within its boundaries were responsible for treating water to make it safe for use by their customers. By the late 1950s, however, residents and public officials were becoming concerned again about water quality and cost.

In 1951, the privately-held California Water Service Company, which served Concord, Clayton and other local towns, became a wholesale water customer of the District.

But a request by the company for a steep 43% rate increase just a few years later prompted citizens to rebel. 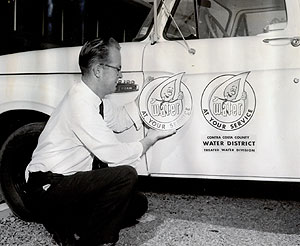 The 1960s and 1970s saw tremendous change and growth for the Contra Costa Water District as it modernized and upgraded its facilities, building the modern water distribution system that is still used today.

In 1965, ground was broken to build the 2,000-acre-foot Contra Loma Reservoir in Antioch as a peaking and emergency supply for the Contra Costa Canal.

In 1966, construction started on the Ralph D. Bollman Water Treatment Plant (PDF) in Concord, a state-of-the-art facility that has been expanded steadily. Today, the plant can produce up to 75 million gallons of water per day and is the District's largest water treatment plant.

And in 1971, a new District Center was constructed in Concord that put many of the District's offices and maintenance facilities on one campus. The main building was named after the Water District's original champion, Thomas Carlson.

Despite a usually ample water supply, the District still struggled with the problem of salinity.

Water was particularly salty in the summer and fall months and salinity levels exceeded public health limits during the severe drought of 1977...at that time, the driest year on record.

At the same time, the county’s growing population began to trigger concerns about the reliability of the Contra Costa Canal.

The canal had been designed and built primarily for industrial and agricultural service and was subject to outages and landslides.

After several attempts to find federal and state support for a variety of large proposals, a new reservoir, owned and operated by the District, was designed to improve water quality and serve as a back-up supply of water in emergencies.

In 1988, voters passed authorization to fund the Los Vaqueros Reservoir Project as a reliable source of higher-quality water for the District.

Ground was broken for the project in 1994 and the reservoir was dedicated in 1998 at a ceremony that drew more than 3,000 people. 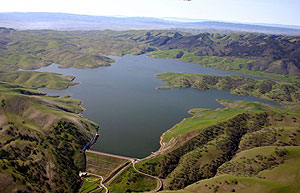 It was the first new dam built in California in more than 15 years and the achievement received many awards. Los Vaqueros was built on-time and below-budget.

Aside from drinking water, Los Vaqueros provides recreation with fishing and more than 55 miles of trails. It protects endangered species ranging from the red-legged frog to the Alameda whip snake and protected golden eagles.

The Los Vaqueros Project remains the largest, most significant project ever undertaken by the District.

But CCWD continued to work to meet the demands of its growing number of customers.

The Randall-Bold Water Treatment Plant (PDF) was built in Oakley in 1992.

The plant was designed from the outset for modern ozone disinfection. Following an upgrade in 2007, it now has a capacity of 50 million gallons per day and can be expanded to 80 mgd.

Treated water is stored in a 5-million gallon underground reservoir on site. The plant is jointly owned by the Contra Costa Water District and the Diablo Water District. 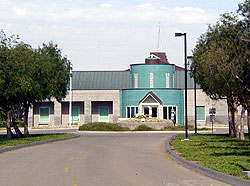 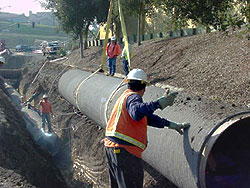 In 2003, a 21-mile, 42-inch pipeline was completed to bring treated water from the Randall-Bold Water Treatment Plant to CCWD's water distribution system in Central County.

The $115 million project had two purposes: to ensure that a reliable supply of water will be available after an emergency, and to free up capacity in the Contra Costa Canal to accommodate growth in East County. A majority of the project was funded by new home connection fees.

The search for higher quality water led to building an additional intake: the Middle River Intake and Pump Station. It was completed on Victoria Island in 2010. This new intake brings to four the number of intakes the District can use to pump water.

It ensures access to high-quality water year round and protects the environment by increasing the District's ability to avoid pumping in locations where sensitive fish species are present. 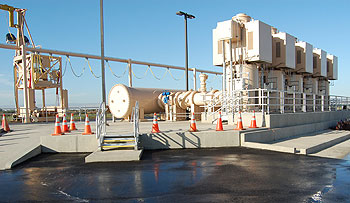 In 2004, 62% of the District’s voters approved the continuation of studies that could lead to the expansion of the Los Vaqueros Reservoir from 100,000 acre feet to as large as 500,000 acre feet.

The project was completed in July of 2012, with a capacity of 160,000 acre-feet, Los Vaqueros is now the largest reservoir in the Bay Area.

Today, CCWD continues to meet the needs of industry and the urban population that has grown in this area. While there are few agricultural customers today, CCWD serves treated and untreated water to a population of 500,000 in Central and East Contra Costa County.

The District is working to protect the quality of its source water in the Delta, continues to improve its treatment processes and strengthen its distribution system while holding down rates.

The future holds many challenges for the District as the Delta and the needs of its customers change.

The Contra Costa Water District is up to the challenge and will continue to exceed the expectations of the public.